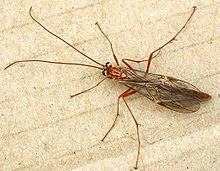 The term wasp is typically defined as any insect of the order Hymenoptera and suborder Apocrita that is neither a bee nor ant. Almost every pest insect species has at least one wasp species that preys upon it or parasitizes it, making wasps critically important in natural control of their numbers, or natural biocontrol. Parasitic wasps are increasingly used in agricultural pest control as they prey mostly on pest insects and have little impact on crops.

We have 149 guests and no members online